The history behind collaborative finance

How to use collaborative finance to achieve your goals

There's a huge stigma when it comes to talking about money, but why is this? Many say it's a long-held stereotype within the U.K. (and we suspect other nations think this too) that it's impolite to talk about finances. However, research suggests that this is not the case.

According to a study conducted by the Money and Pensions Services, some of the most common reasons as to why we don't talk about money are:

Shame: we feel embarrassed that we don't have our finances in check or have more debt compared to other people.

Not wanting to burden others: we feel bad if we have taken control of our finances and are doing reasonably well compared to others.

It causes anxiety: as money does inform most of what we do and influences our goals in life, and if we're not where we want to be financially, we put pressure on ourselves to be more successful.

The study also showed that people tend to worry about money at least once a week. And for those in relationships, people find it challenging to open up to their partners or even friends and share these concerns.

But for some, this is less of an issue because they grew up in communities where they felt comfortable opening up and talking about their financial goals. And one of the tools these communities use is called a ROSCA, which stands for a Rotating Savings and Credit Association and is what we use at StepLadder.

So this week, we're dedicating some love to the ROSCA, explaining what it is, how collaborative finance is used worldwide, the benefits of this and a couple of stories from people we know who grew up remembering this centuries-old tradition. So make yourself a cuppa, and let's get into it!

The origins of the ROSCA are unclear, but historical records show that this model existed before the industrial times when agriculture was the primary source of economic growth. Across China and Japan, there are records of the ROSCA dating back to the ninth century, the seventeenth century in Korea and the nineteenth century in many parts of Africa. In Africa alone, the use of collaborative finance was exceptionally high, where between 50% to 95% of the adult population was using this model. In rural areas, history tells us that the ROSCA was the sole saving and credit option for these communities. 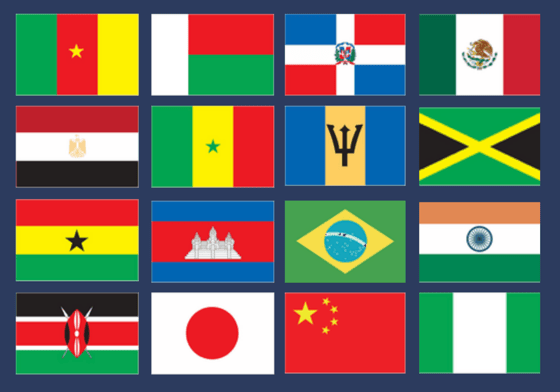 Some of the nations around the world that use the ROSCA model.

What do other nations call a ROSCA?

What's really special about the ROSCA is the various different names they are called around the world such as:

In Cameroon; it's called a Njanggi

In Egypt; they say Gameya

In Ghana; it's a Susu

In Kenya; we've got a Mabati

In Madagascar; it's a Fokotany

In Sengal; It's called a Nath (which is what the StepLadder crew call me)

In Cambodia; they say Tontine

In China; it's pronounced Lun-hui

In Japan; the locals call it a Tanamoshi

And in Sri Lanka, it's commonly known as a Chit Fund

Moving over to Latin America, the Caribbean and Pacific:

In Barbados; they use Meetings

In Brazil; you've got Consorcio

In the Dominican Republic, you say San

In Jamaica, we've got a Pardna

And in Mexico; you'd say a Mutualista

The list goes on but what's so powerful about collaborative finance is that at the heart of it all is discipline, motivation and community.

How does a ROSCA work?

A ROSCA works by bringing together several people where they commit to monthly instalment payments over a fixed period.

For example, you and 20 of your close friends and family each commit to paying £100 each month over 20 months. 20 people x £100 = £2,000 and each month one person in that group gets given the £2,000. Then each month you continue to pay the £100 until every member of that group is given their money back. The benefit of this means you can save bigger sums of money in a shorter amount of time. You also have the ability to scale this up and down, dependent on the size of the group and the goal you're trying to achieve.

One of the benefits of this model means that each member is guaranteed the total allocation of this lump sum which can be used to purchase their desired product. Back in the day, these funds would have been used for stuff like agriculture equipment to automobiles, whereas now they're being used for much larger purchases such as property or investments.

At the time, the ROSCA was considered as an innovative form of microfinance, and it still is today. Some would argue the case this model is more valuable than the modern financial products and services we see today which is why the ROSCA is so desirable.

The benefits of using collaborative finance

One of the main benefits of the ROSCA and why it is so appealing to communities around the world is that it helps individuals with little or no access to credit. Today, banks and other lenders have strict rules for offering financial products and tend to reject people who pose a high risk. Whereas with the ROSCA, you don't make any interest in it, so lenders don't use it because it's not a viable option for them and it's more appealing to those who don't have a good credit profile.

Which is why actively produce content that could help you to improve your credit score!

Ok, it's starting to make sense, but why do people choose to use a ROSCA vs saving money on their own? Well, there's several reasons why a ROSCA could be more beneficial vs other financial products and services and these are:

You save time: 90% of people who commit to a ROSCA on average receive their savings quicker than if they saved alone.

You are in control of the risk: instead of a bank telling you that you can't afford a credit card or a mortgage you define what you can achieve and you collaborate with people you trust to help you with your goals.

You're accountable for someone else: many of us struggle to stay disciplined with our financial goals and lack the self-control needed to motivate ourselves to success. With a ROSCA, it's a collective commitment with people supporting you, as much as you’re supporting them. So you feel obliged to stick with it.

So what’s all this got to do with StepLadder?

At StepLadder we've digitised the ROSCA to make it more appealing and in line with the way consumers like to manage their money.

We call our model a 'Circle' and in doing so, we've been able to add a few extra benefits to this which are:

Support: you get direct access to the StepLadder team of property market experts, wellness coaches and financial cheerleaders you spur you on during those down days.

Discounts: through our service, we're able to offer Members discounts on property buying services worth up to £1,500 to help you buy your first home.

Credit score: when you pay into one of our Circles we update the credit agencies which could help you boost your credit score, which means you could be paying less interest in the long run.

Financial education: not only are you more likely to achieve your goals in a group, we teach you about how money works and our Members foster relationships with people from all walks of life (we think this is one of the best benefits).

Are there any disadvantages of a ROSCA? Every financial product in one way or another has risk, but one watch out is making sure that if you start a ROSCA on your own, there's a risk that someone might drop out once they have their money. At StepLadder we mitigate this as we are an appointed representative of More Lending and have mechanisms in place to avoid this.

Want to know more about StepLadder? Visit the Circles section of our website.

Now that you understand what a ROSCA is, the history behind it, what other nations call it and the benefits, now comes the emotive segment where we’re sharing a couple of anecdotes that our Members and friends have kindly shared. Here's what one of our Members had to say:

"I am so happy to see that you've organised what I know as a Paluwagan in the Philippines. It's so helpful for people who are struggling financially. I've recently separated, and I was finding it hard to save. StepLadder has given me the opportunity and confidence to save instead of spending. I feel secure because I can speak to the team on video calls as well as an email which makes me feel supported and allowed me to trust them."

Another great example was sent over from one of our Ambassadors:

"My mum learnt about Pardnas from her mum, and she has always been a big enthusiast of them. Out of my two parents, she has been much better at managing money and I think it's the discipline she built by being part of a Pardna, which she has also instilled in me, creating 3 generations of homeowners, starting with my grandmother.”

So you can see the ROSCA has evolved from a scheme that helps people with little or no access to credit to a tradition which is passed down from generation to generation and it fills us with joy when we're able to help communities in the U.K achieve their financial goals.

A final note to our readers; if you have a story of the ROSCA from your own community, reach out to us via our IG page as we'd love to hear it.

Missed or late payments may have an adverse effect on your credit score. Using StepLadder’s P2P product you will lend to and borrow from other Members in your Circle. Capital at Risk, Not FSCS Eligible. Some of our trusted partners pay us a commission should you choose to use them.

Marketing Manager with over 5 years expertise in banking, digital and Marketing.

How to build a better relationship with money.

Mental Health Awareness week has come round again, and as we reflect on its purpose, it couldn't be more timely..

How mood can affect your progress

Discipline and motivation; how mood can affect your progress

Financial Wellbeing In the News

What does the New Tax Year mean for me?

What does the New Tax Year mean for me?